Players take turns banning 3 champions each in the on-site Challengermode lobby chat starting with the left/top player. None of the banned champions are allowed.

Note: A player is allowed to not ban any champions at all - this player has to state that he/she does not want to ban any champions in the on-site Challengermode lobby chat in that case. Starting the game without communicating this to your opponent can get you disqualified.

Note #2: If a player decides to write all three bans in one go, that is alright - as it does not put the opponent at any disadvantage. The other player may then write the names of the three champions he/she would like to ban. 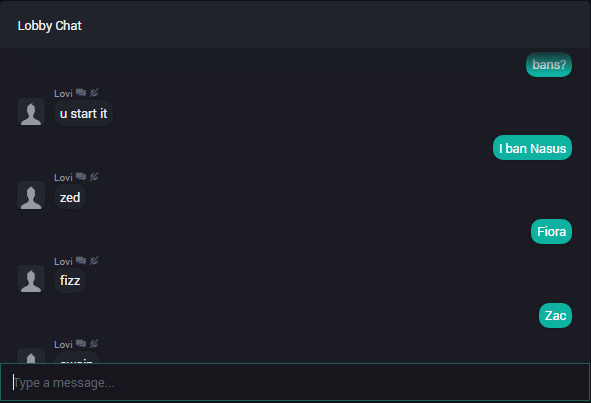 Anyone that plays with a banned champion (as agreed in the Challengermode chat pre-game) may get disqualified. This means that neither of the players' banned champions can be played with (none of the 6 are allowed).

Only bans made in the Challengermode chat are valid. Written champion names are final. Any bans written after Champion Select has started are not valid.