Learn about the ranked Tier system used on Challengermode 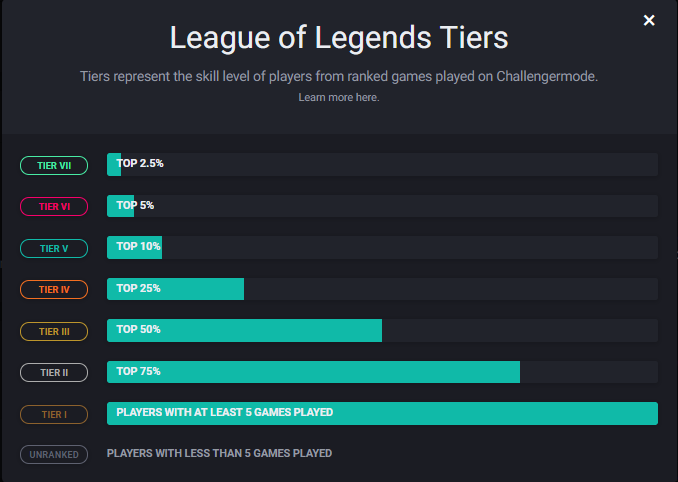 Tiers are division/segments that roughly represent a range of skill for a player in a specific game. The skill range is calculated based on games played on Challengermode (e.g. in a tournament) and relative to other players on Challengermode.

There are currently 8 Tiers in League of Legends, 7 Tiers in CS:GO and 5 tiers in Dota 2. The number of Tiers will grow slightly over time, as there can only be a certain number of players in the top tier.

Based on your Tier, you can then enter into ranked tournaments with bigger prize pools and often restrictions on who can participate. This means that players in the lower Tiers will be able to play with others at the same skill level, and vice versa for high Tier players.

A tournament with a Minimum Tier 1 and Maximum Tier 3 would indicate that only players who are ranked in Tier 1, 2 or 3 will be able to participate. Anyone in Tier 4 or higher will not be able to play in that tournament.

How to get a Tier

Play 5 games on Challengermode to go from Unranked to getting placed in a Tier.
The more you play and the more people you play against, the better the skill rating will get. So don't get dismayed if you think the Tier doesn't accurately reflect your "real" skill level, you'll likely rank up quickly again after a few more games and tournaments!

Only Tournaments or Matchmaking games (challenges) will count as a "game". In other words, matches played against other players on Challengermode. The LoL/Dota 2 Daily Ladder or public CS:GO servers hosted by Challengermode do not count towards your Tier rank.

Why you should invest in getting a Tier

Getting a rank is meant to be one step in the right direction for your esports career or goals as a gamer.